Peter M. Susemihl is Chairman, Shareholder and Director in the firm. He has been with the firm since 1973. Mr. Susemihl’s experience is in the field of special districts, development and banking.

He received his J.D. from Colorado University School of Law in 1969. He completed his undergraduate education at The Colorado College, where he earned a B.A. in political science in 1966.

Mr. Susemihl has been awarded the Colorado Springs Business Citizen of the Year, the Range Rider Silver Spur Award, the Sertoma Service to Mankind Award and the Sports Corporation Thayer Tutt Sportsman Award.

Martindale-Hubbell is the facilitator of a peer review process that rates lawyers. Ratings reflect the confidential opinions of members of the Bar and the Judiciary. Mr. Susemihl has received a rating from Martindale-Hubbell, and if you are interested in determining that rating, click here: Martindale-Hubbell.

Pete has five children and 4 grandchildren

He is licensed to practice law in Colorado (federal and state courts) and the U.S. Supreme Court. 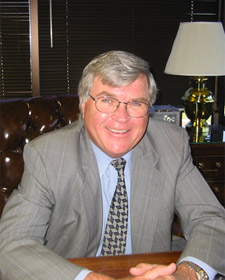 Feel free to email me.

Back To Home Page
Scroll to top